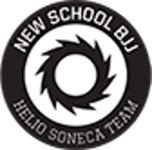 New School BJJ was originally established in 2007 and was taken over in 2014 by Practitioners Nicky Robinson and Antony Chahal. As well as teaching at schools in Battersea and Willesden, both Nicky and Antony regularly compete in Global Jiu Jitsu competitions all over the world.

Since 2014, the school has grown considerably into a friendly community with equal teaching priority being given to adults and children, some of whom now proudly take part in major competitions across Europe and afar.

Below are the types of classes you can take part in

GRADING
Grading for kids and adults is held annually every summer. However, belts will be given when due throughout the year without examination based on your attitude, ability and effort during the classes, whether you compete or not.

We have sponsored youth and adults who have gone on to win national titles. We are proud to announce that we came in 3rd place for the IBJJF 2017 British Kid’s National Trophy.

Directions to SW11 2DA  Send to my phone